skip to main | skip to sidebar

I used to buy the $2 - $3 masonry blades and they work fine if you just want to cut a couple of concrete blocks or landscape bricks.  Buy more than you need and plan on returning the unused blades.  You will be surprised how fast they wear.  I buy the 7 1/4 blades for my circular saw.  A couple of summers ago I built a raised patio to replace a deck.  I hated all the junk, spiders and animals that got under the deck.  The raised patio solved that problem and looked very cool also.  I used landscape bricks on the perimeter.  I had to cut a lot of bricks and decided to try a Bosch 7 in. Segmented Rim Diamond Blade DKO which cost under $30.  It lasted the entire project and was available for a new project this year.  I used it to cut squares out of a concrete floor in a basement of a project house.  I'm putting up I-beams to stop the block walls from bowing in.  I cut 15  1 foot square holes thru 5" concrete.  It got dull with just 5 holes left so I bought a new blade.  Then it hit me to reverse the blade and see if that would work.  I was able to finish without using the new blade.  I checked the documentation on the blade to see if there is a correct way for the blade to rotate and did not see any mention of it.  My recommendation would be to check with the manufacture before reversing the blade.  I should have read the documentation before I used the blade and I believe it would have lasted even longer.  So far, I'd say putting up Ibeams to fix a bowing basement wall is a good DIY project.  First, score or cut the concrete floor where the base of the Ibeam will be. Then hit it a few time to break the concrete.  Remove the concrete and dirt to allow for the Ibeam.  Position the Ibeam in the hole.  Nail or screw framing at the top to hold the Ibeam against the wall.  Fill the hole at the base of the Ibeam with concrete.  I'll publish pictures later on.  I also check YouTube to see how others do things before I start. 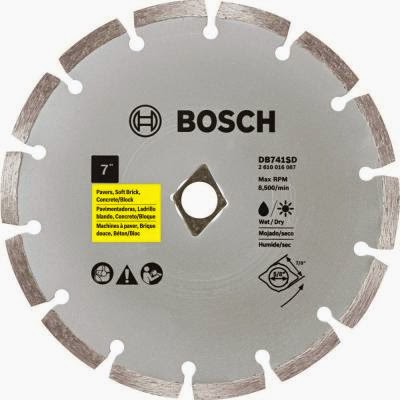